THESE POWERFUL NATIVE AMERICAN ARTIST WERE PART OF A EXHIBIT IN NEW YORK THAT I MISSED,.. TITLED "OFF THE MAP": LANDSCAPE IN THE NATIVE IMAGINATION....VERY INSPIRING WORK. 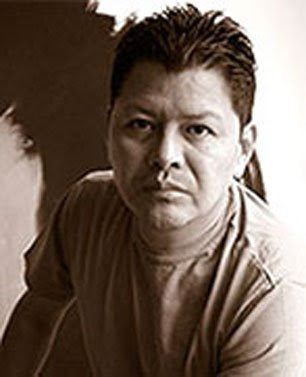 CARLOS JACANAMIJOY
The large-scale expressionistic paintings of Carlos Jacanamijoy (Inga, b. 1964) offer a surrealistic vision of his interior landscape. His work is informed as much by his memories of the colors, light, and sound of the tropical rainforest of southwestern Colombia as by the urban cityscape of his new home in Brooklyn, New York.

“In Brooklyn, I see from the window of my studio the front of an old brick building bathed by the light of the sun, and a few formless shadows which, in an endless movement, creep in a row like animals on a thick horizontal line. Here, the roar of the subway or the incessant traffic of cars and pedestrians on the Brooklyn Bridge, projected by the sun, is right in front of me, through my window. In the same way, I remember listening, among lights and shadows, to the cacophony of animals during an overwhelming night in the middle of the jungle. My inspiration is, on one side, my experiences in my studio, on the other, a succession of memories of the jungle in Putumayo. It is this constant trail of memory and dreams passing by in my mind when I am in front of that other window: the empty canvas.” 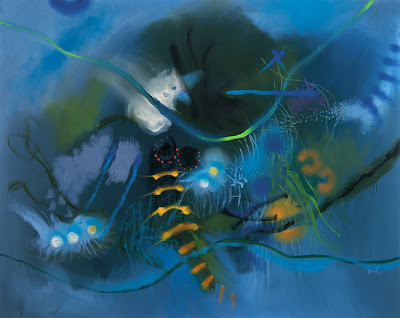 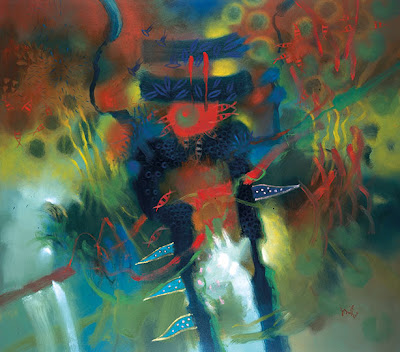 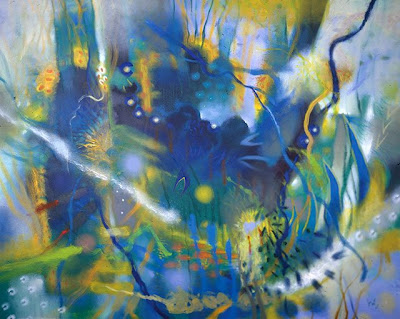 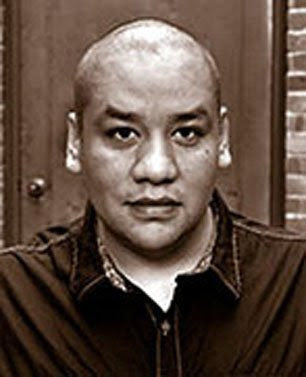 In 2004, painter and installation artist Jeffrey Gibson (Choctaw/Cherokee, b. 1972) began creating fantastical landscapes using layers of intensely colored marks, glossy and transparent pours, and his signature pigmented silicone. The environment he has created and explored with his work in the last few years reveals a narrative of emergence into a utopian state, which will lead, inevitably, to corruption and collapse.

“Utopia was important for me to envision and relates to my being Native American and having grown up solely in a Western consumer culture. My desire to act out the role of an explorer depicting an inviting landscape, via painting and specimen retrieval, was a reaction to Native tribes’ being consistently described as part of a nostalgic and romantic vision of pre-colonized Indian life. The aesthetic of these paintings and sculptures came from turn-of-the-century Iroquois whimsies, contemporary and historic powwow regalia, cultural adornment of non-Western cultures, techno rave and club culture, and earlier utopian models.” 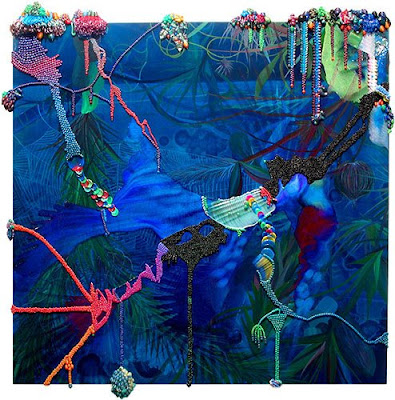 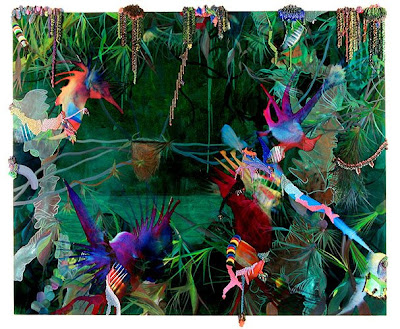 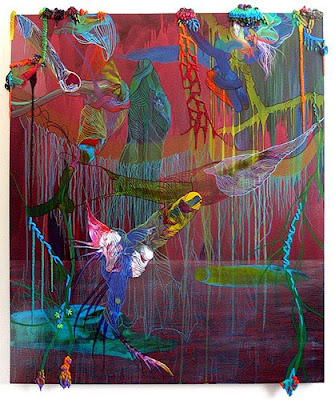 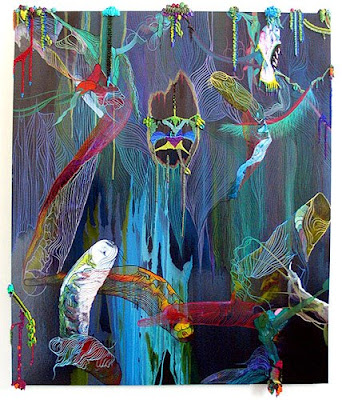 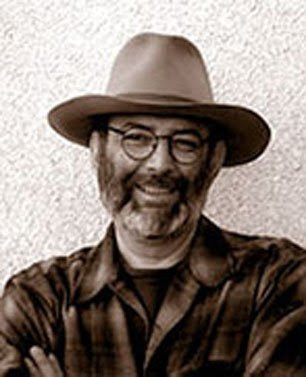 Though self-taught artist James Lavadour (Walla Walla, b. 1951) is known primarily as a landscape painter, in the 1970s he also began to work extensively on a series of monochromatic abstract paintings, which he refers to as his Interiors. In 2000 he merged this parallel series with his landscapes; his recent paintings, such as Wall (2006), exemplify this complex, nuanced work.

“I am acutely aware of the surface of the canvas and every detail of what is happening in the paint. The images that I see in the paint are memories of my living life, a vision of the minutiae of experiences stimulated by looking into paint. I know that it is a hair’s breadth of difference, but it is important to me as I am only now beginning to understand how a painting functions. A painting is a footprint of a great informative event. It is concrete evidence of unseen processes, that stuff that exists beyond our limited perceptions of time and space. A painting seems to connect into the circuitry of the world both geologically and perceptually.” 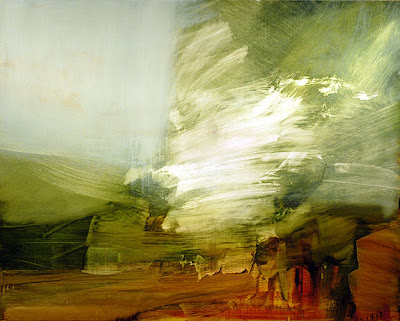 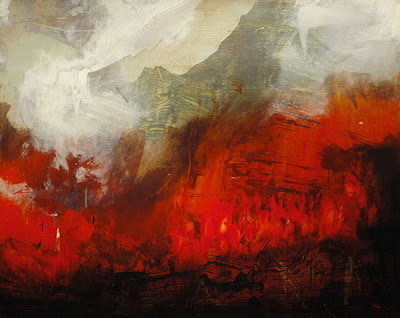 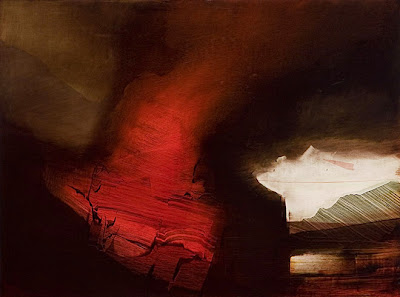 INTRODUCTION TO "OFF THE MAP: LANDSCAPE IN THE NATIVE IMAGINATION
The relationship of Native people to place, historically and metaphysically, is well-documented by scholars and expressed at length in the visual and literary arts. Indeed, this relationship to “the land” is often cited as the very root of our indigeneity. Geography has shaped and defined Native cultures, literally and conceptually, over countless generations. Many of our origin stories and understanding of the universe relate to geographical features in the landscape, and the material culture of each community is based on the natural environment of our homelands. For more than 500 years, land has also been a site and source of conflict and struggle with outsiders—be they non-Indian settlers seeking farmland, or commercial enterprises eager to exploit natural resources. As a subject for Native artists, then, the land/landscape is laden with history and expectation. Land is home, culture, and identity, but it also represents violence, isolation, and loss.

The artists in Off the Map all use the landscape as both muse and subject, but none seek to represent a specific place you can locate in a guidebook or on a map. All landscapes, despite their intentions, are imaginary constructs, and these artists make no attempt to literally depict a specific place and time. For Emmi Whitehorse landscape is an ethereal place of memory, suffused with impressions of land and water through smell, touch, and light. James Lavadour equates walking over the hills and mountains of his home community on the Umatilla Indian Reservation with the movement of his hand across the surface of his paintings. Carlos Jacanamijoy’s vivid landscapes embody creation and the transformative Putamayo jungle of Colombia through abstractions of color and light. Jeffrey Gibson creates his landscapes as an anti-colonialist act that defines his Native identity, warts and all. Erica Lord explores the liminal space that exists between her identities and homes, a world not fixed in time or place. Together, their work embodies the longing and emotion, connection to and detachment from the land that are universal to contemporary Native experience. 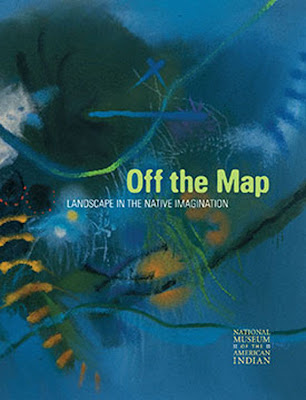 OFF THE MAP: LANDSCAPE IN THE NATIVE IMAGINATION

As a subject for Native artists, the landscape is laden with history and expectation. Land is home, culture, and identity, but it also represents violence, isolation, and loss. In strikingly beautiful images and insightful essays, Off the Map: Landscape in the Native Imagination explores the complex relationship between Native art and the representation of landscape, seen through the art of James Lavadour, Jeffrey Gibson, Carlos Jacanamijoy, Emmi Whitehorse, and Erica Lord. Together, their work embodies the longing and emotion, connection to and detachment from the land that are universal to contemporary Native experience.
Specifications
88 pp; 92 color images; 8 ½ x 11 in.
ISBN-13: 978-1-933565-08-8