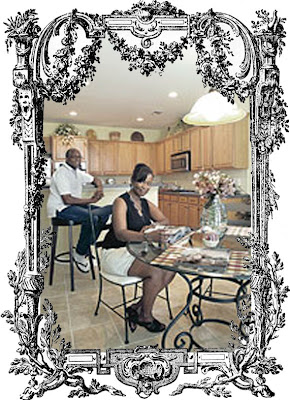 OK Folks,... All that other stuff I was writing about in this blog journal... It was'nt nothing compared to this News Scoop!!,... My (ultra busy, hard working, elementary school teacher, Mother, Home maker, etc.) Cousin, Mrs Starmayn Gosa-Walker-Mackie, Got a New Husband, Mr Henry (New Cousin) Mackie, and they bought a Brand New Designer Martha Stewart Home in Atlanta Ga. in 2007.

Plus... My Cuz and her "New Honey-pinch" got their photograph on the front page of the Real Estate Section of the Wall Street Journal Newspaper.

Check out the article and read about how "Home Girl" Martha Stewart is "workin" her domestic skills to the "max". There are lessons to be learned here Folks!!!


By Michael Corkery
From The Wall Street Journal Online

All across the country, home builders are gasping for air as sales plunge, inventories rise and profits disappear. But in one small corner of the housing market, the sales picture is a little brighter: There is steady demand for houses designed in part by Martha Stewart and built by Los Angeles-based KB Home.

"I love all her things," says Menyon Green, a 42-year-old nurse who bought a Martha Stewart-KB Home in this Atlanta suburb earlier this year. "I just knew this was going to be a good subdivision."

The Martha homes are a rare source of good news for KB, the nation's seventh-largest builder by market value. Last year, the company's chief executive left over a stock-option backdating scandal and two weeks ago KB reported an unexpectedly large quarterly loss, amid deteriorating markets.

Right now, the Martha homes, representing less than 5% of KB's overall home-building production, aren't large enough to lift the builder's flagging earnings. But with the Martha developments outselling most of KB's other subdivisions, the company is expanding the Martha brand to as many as 36 new markets, as soon as it can obtain the necessary permits and land, a KB spokeswoman says.

Gregory Duriez, KB's Atlanta division president, says he is struggling to keep up with demand. "My problem isn't how can I sell more Martha homes. It's how can I get more lots in front of me," he says. From March through June 15, the two Martha Stewart developments alone drew 42% of the people who visited KB's 22 subdivisions in the Atlanta metro area, according to KB.

But the success of the Martha-KB venture, launched 16 months ago, could pose a potential dilemma: how to expand a successful product fast enough to boost profit, but without weakening the brand from overexposure.

"Right now it's a unique type of offering," says Rita Rodriguez, chief executive of Enterprise IG in the U.S., a brand and design agency. "You can invite someone to your home and say, 'This is a Martha Stewart home.' But if it's replicated and stamped across too many odd markets, the uniqueness can be gone. That cache and aspiration isn't there and you just become like everybody else."

The Martha-KB partnership is a closely watched experiment in brand marketing. The conventional wisdom among home builders was that home-buying decisions were based on two primary considerations: price and location. While those factors are still extremely important for home buyers, the success of the Martha homes shows that branding also matters in some cases. The Martha homes target a broad market, with prices ranging from $148,990 to about $500,000.

Here in the Atlanta area, where new-home sales dropped 20% in the first quarter of 2007, traffic at Martha-KB new-home developments has been steady. The largest Martha-KB Home development has been outselling the average Atlanta subdivision 2 to 1, according to SmartNumbers, a real-estate information and analysis firm, based in Marietta, Ga.

The Martha homes are modeled after Ms. Stewart's current and former residences in New York, Connecticut and Maine. She and her design team helped design many of the 64 floor plans from which buyers can choose. KB heavily markets the domestic diva's personal influence: open kitchens and dining rooms suited for entertaining, plentiful windows to capture natural light, and an exterior trim available on some homes that supposedly matches the color of Paul Newman's eyes. (The actor was Ms. Stewart's neighbor.)

Some buyers say they are attracted to the Martha homes because they suggest quality, functionality and class. Others say they expect the homes will have a better resale value than other homes.

"I have faith that Martha's Stewart's name is going to help market the property later on if I want to sell it," says Melanie Washburn, a 35-year-old marketing manager at a gaming technology company in Atlanta, who closed on a Martha home in Fairburn in April.

Currently, in addition to the Atlanta area, Martha-KB homes are on sale in Perris, Calif., east of Los Angeles; Katy, Texas, near Houston; and Cary, N.C., near Raleigh. Construction has begun on Martha developments in Denver, Daytona Beach, Fla. and Lancaster, Calif., outside Los Angeles. The company says it could extend the Martha Stewart brand to up to 10% of the homes it builds, which totaled 39,013 units in 2006.

"It's our version of the iPhone. It illustrates the power of something different with a brand tied to it," says KB's chief executive, Jeffrey Mezger, who has set a clear goal for the company: "Let's get these things open everywhere, as fast as we can."

KB and Martha Stewart's company have been selective about how they market their co-brand. For instance, plans to build "mock" Martha homes in Macy's stores around the country have been put on hold for now, amid the weak housing market. Neither company will disclose the financial arrangements of their partnership, but Mr. Mezger says the company still has higher profit margins from Martha homes than other homes. Michael Meltz, a Bear Stearns analyst who covers Ms. Stewart's company, says it receives a fee of up to $10,000 per house.

Even if buyers pass on buying a home, they come away with a full dose of Martha. For Martha Stewart Living Omnimedia Inc., which is seeing declining viewers, but strong advertising on the "Martha" television show amid shrinking audiences for daytime TV, the KB venture is a marketing opportunity. The homes are a showcase for her bedding, paint colors and magazine, "Martha Stewart Living," which is displayed ever so subtly in the model homes. A large picture of Ms. Stewart hangs in the sales office and adorns marketing brochures. One couple visiting a Martha community near Atlanta told a saleswoman they weren't interested in buying a home. They came only to look for decorating ideas.

That explains, perhaps, why Ms. Stewart's design team is so meticulous about outfitting the model homes in the subdivision. The team tries to pay close attention to domestic details, including the color of the lentils stored on the kitchen counter, and the matching colors of the book bindings on the shelves. Buyers can pick from hundreds of different options for their own homes.

The KB Home staff says when the sink in one model wasn't large enough to clean a Thanksgiving turkey, Ms. Stewart had them rip it out and install a larger one. She also ordered up a new kitchen counter top. She wanted a surface large enough to roll pie dough on.

Even though certain elements of the houses are meant to resemble Ms. Stewart's own homes in the chilly Northeast, buyers in the balmier climes of Atlanta, Raleigh, N.C., and Riverside County, in southern Calif., feel a connection, too.

"This is southern living," said Beverly Clermont, while passing through a massive kitchen in a model of a Martha home in Fairburn. Her sister, Anges Young, corrected her: "I think Martha is from Connecticut."

"Yeah, but she lives like she's from the South," said Ms. Clermont, who says she would buy the house, if she could sell her current home, which has sat on the market for six months.

Ruth Green, whose daughter, Menyon, bought them a home in the Martha subdivision in Fairburn, called "Hampton Oaks," said it "reminds me of the glamour of the Hamptons" in Long Island, N.Y.

Menyon Green watches Ms. Stewart's TV show during breaks at work, buys Ms. Stewart's linens, and recently bought a glass bowl to display seasonal fruit, as Ms. Stewart suggested on her show. "If I could afford to do it, I would do the whole thing Martha Stewart style," she says. "Matter of fact, I would like her to come to my house and show me how to do it."

While some buyers might not be able to achieve a place that is appointed as smartly as Martha's model homes, they are trying to get close. KB Home's Mr. Mezger says buyers of Martha Stewart homes in Atlanta spent, on average, 15% above the base price of the home on option upgrades, compared to 7.5% for non-Martha homes. Nationally, buyers of Martha Stewart homes spend on average 50% more on options than buyers of non-Martha homes.

Mr. Mezger also boasts that in the hot, arid climate of California's inland empire, 85% of Martha home buyers installed a fireplace that was featured in Martha's model home. Among the buyers of KB's non-Martha homes in the Inland Empire, 25% installed fireplaces.

Norm Lynde, a chief financial officer at a visiting nurses association, broke his home buying budget to buy one of those fireplaces in his Martha home in Perris, Calif. He said the fireplace made the "home more personal." He likes other features, such as the electrical outlet outside, on the second floor, for hanging Christmas lights. "I never could have imagined buying a home this beautiful." But Mr. Lynde, 49, added, "I was afraid to tell my friends. I am a single guy, and I am buying a Martha Stewart home."
Posted by Xenobia Bailey's Artist Journal at Wednesday, January 16, 2008 1 comment: