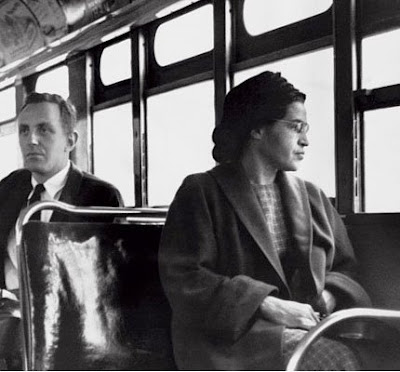 WHEN IT COMES TO THE CIVIL RIGHTS MOVEMENT, "ROSA PARKS WAS IT'S HEART AND SOUL" ARLAN ETTINGER. 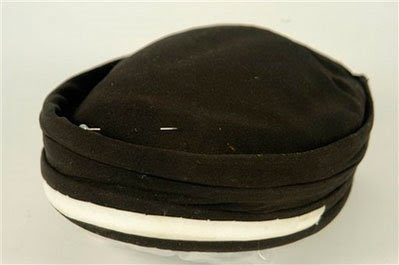 A HAT BELIEVED TO HAVE BEEN WORN BY ROSA PARKS THE DAY IN DECEMBER 1955, SHE REFUSED TO GIVE UP HER SEAT TO A WHITE MAN ON A ALABAMA BUS. 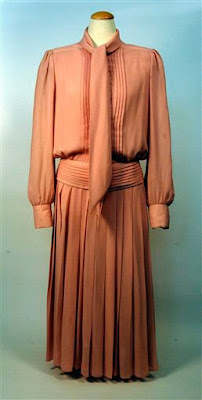 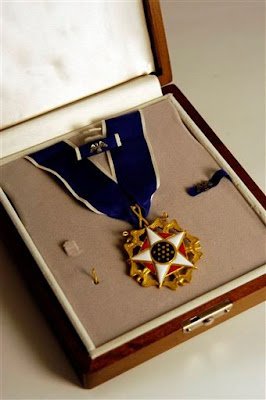 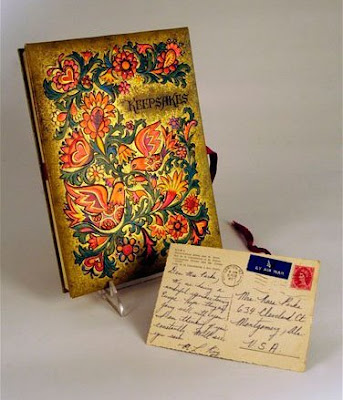 never forget the response he got when he took one of civil rights pioneer Rosa Parks' hats to a meeting at the Apollo Theater in New York.

"It was a fairly plain-looking black hat. And then I said it was Rosa Parks'. And their mouths just opened up without saying a word and tears" flowed, Ettinger said. "It was a very, very powerful moment. You could see the impact this woman has had on everyone."

A Wayne County probate court judge in Detroit has asked Ettinger's auction house, Guernsey's, to find a buyer — preferably a museum, university or other institution — for thousands of Parks' personal items.

Among them are her presidential and congressional medals, a post card from Martin Luther King Jr. and the hat Parks is believed to have been wearing on Dec. 1, 1955, when she refused to give up her bus seat to a white man, cementing her spot in civil rights history.

Ettinger, whose New York-based company has auctioned off items ranging from the possessions of Presidents John F. Kennedy and Franklin Roosevelt to Jerry Garcia's guitars, estimates the Parks collection could be worth $10 million.

When it comes to the civil rights movement, "Rosa Parks was its heart and soul," he said.

Parks, the diminutive woman whose actions sparked the yearlong Montgomery, Ala., bus boycott and threats that eventually led her and her husband to Detroit, died in 2005 at age 92 with many of her most treasured possessions still with her.

There's the Presidential Medal of Freedom she was awarded by President Bill Clinton, along with the rose-colored chiffon dress she wore for the ceremony and the photo of her with the president. There's a tattered schoolbook, "How to Speak and Write Correctly," that she kept from her student days.

There's also a letter she wrote telling of King's house being bombed on a night she was with him at a meeting just a month after the bus boycott began.

"We do not know what else is to follow these previous events, but we are trusting in God and praying for courage and determination to withstand all attempts of intimidation," Parks wrote in her clear, flowing script.

Parks left nearly all of her estate to the Detroit-based Rosa and Raymond Parks Institute for Self Development, which was created to teach young people leadership and character development. But her 13 nieces and nephews, which feuded for years with the people she appointed to handle her affairs, filed a legal challenge to Parks' will six months after she died.

A settlement was eventually reached, although terms of the deal were sealed. Guernsey's, which had inventoried Parks' possessions, was asked by the court to sell them.

Ettinger said the proceeds from the sale will be split between the institute and Parks' relatives. There's no deadline for the sale.

Calls requesting comment left Wednesday with the institute's co-founder, Elaine Steele, and with Lawrence Pepper, an attorney for Parks' relatives, were not returned.

Ettinger said he has gotten the most interest in the collection from groups in Alabama and Michigan. Both the Birmingham Civil Rights Institute and Troy University, home to the Rosa Parks Library and Museum in Montgomery, would like to house it or go in on it together, he said.

Other logical places the collection could go would be The Henry Ford, a Dearborn museum that features the bus Parks was on when she refused to give up her seat, and the Charles H. Wright Museum of African American History in Detroit.

Communications chief Tony Spearman-Leach said the Wright Museum, which held the public viewing of Parks before her funeral, would love to get the collection but doesn't have the money. Wendy Metros, public relations director for The Henry Ford, declined comment.

Much of the collection could be of interest to historians. Among the hundreds of handwritten documents and letters is a note written in 1956 on the reverse side of NAACP stationary, in which Parks recounts being told by a white boy when she was 10 years old that he was going to hit her.

"He made a threatening gesture with his fist. I picked up a small piece of brick and drew back to strike him if he should hit me. I was angry. He went his way without further comment," she wrote.

Parks also wrote instructions for Montgomery's black citizens telling them how to comport themselves during the bus boycott; her impressions of the man who wanted her to give up her seat; and her thoughts on Emmett Till, a 14-year-old from Chicago who was abducted from a relative's home in Mississippi and was tortured and killed, purportedly for whistling at a white woman.

"Anyone who views Rosa Parks as a mild, meek woman who for a brief instant stepped out of the shadows, took action and then went back in, this would debunk that in a minute," Ettinger said. 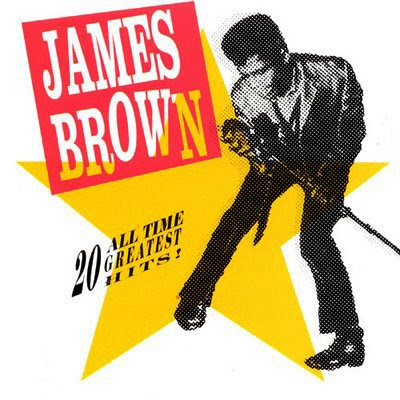 THE OTHER DAY I GOT A E-MAIL FROM MY AFRICAN DANCING FRIEND MALAIKA ADERO, SHE IS A EDITOR AT SIMON & SCHUSTER PUBLISHERS, HER OFFICE IS AROUND THE CORNER FROM CHRISTIE'S AUCTION HOUSE. THE E-MAIL READ.

Starting July 16th the effects of James Brown will be on display and on auction at Christie’s auction house (which happens to be on 49th Street next to my S&S building where I work. I have to check this out…maybe there’s an item I’d want to bid on (a cape, a photo). Anyway, it will be fun just to SEE what’s in the collection. So, if you’re in the city, check it out.

I PLAN TO GO DOWN TO CHRISTIE'S AND VIEW THE ITEMS, AT THE MOST, I WILL PURCHASE THE CATALOGUE OF THE JAMES BROWN ESTATE. HOPEFULLY A MUSEUM OR SERIOUS COLLECTORS WILL PURCHASE MAJOR ITEMS FROM THE ESTATE.