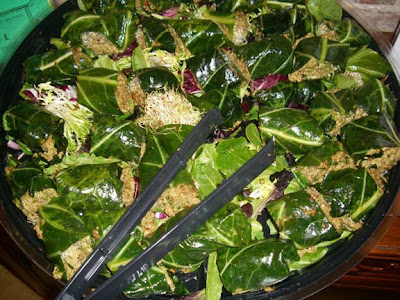 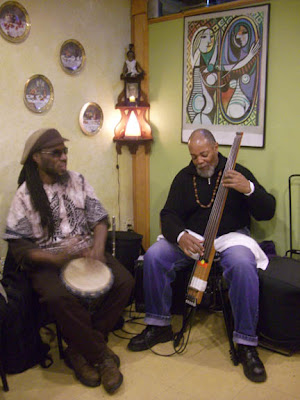 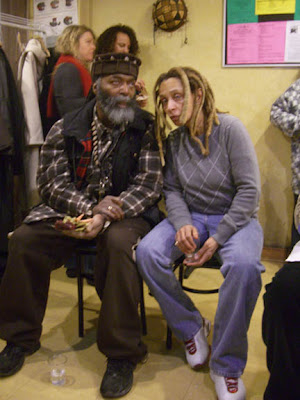 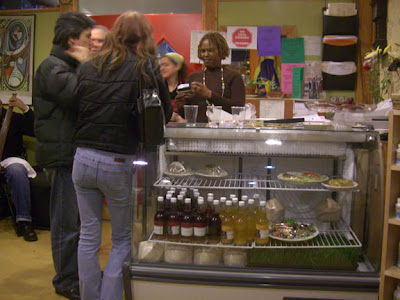 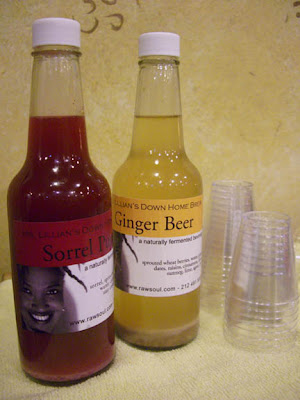 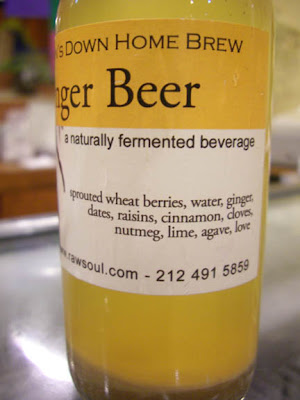 ON MY WAY HOME FROM SEEING THE EXHIBIT NEO HOODOO, I GOT OF THE D TRAIN AT 145 AND ST. NICK BECAUSE I WANTED TO GO TO PATHMARK SUPERMARKET AND GET SOME FRUIT JUICE FOR MY MORNING SMOOTHY.

I WAS PASSING BY RAW SOUL RESTAURANT & JUICE BAR, WHEN I SAW THE RESTAURANT WAS FULL OF PEOPLE STAND AND LISTENING TO LILLIAN BUTLER, ONE OF THE OWNERS SPEAK.

MY FRIEND DAVID AT THE DOOR AND HE WAVED TO ME TO "COME ON IN", THEY WERE HAVING A OPEN HOUSE TO THANK THE COMMUNITY FOR SUPPORT AND TO SHARE THEIR TASTY LIVE FOOD CUISINE WITH THE GUEST.

I'M NOT SURE WHAT I WAS EATING, BUT YOU CAN MARK MY WORK, IT WAS UNBELIEVABLY DELICIOUS. I REALLY HAVE TO UPGRADE MY FOOD PREPARATION SKILLS TO LIVE FOOD. WHAT I REALLY, TRULY LOVE ABOUT RAW SOUL IS THE INTERNATIONAL MENUS THEY HAVE CREATED, I CAN'T SAY ENOUGH GOOD THING ABOUT THIS RESTAURANT.

I HAD GREAT LIKE MINDED CONVERSATIONS ABOUT THE CHANGE OVER TO THE SUPERNATURAL LIFESTYLE OF THE 21ST CENTURY WITH FOLKS IN THE HARLEM COMMUNITY.

A COUPLE OF MUSICIANS PERFORMED A FEW SET BEFORE THEY WENT UP THE STREET TO DO THEIR GIG AT ST. NICKS PUB. I STAYED LONGER THAN I PLANNED, BUT IT WAS ALL GOOD.

We invite to join us for our Open House to experience raw and live foods that are soul-fully delicious and healthy. We have planned a JOYOUS evening that includes:

Bring your family and friends so that you can begin your health journey together.
Make the commitment today to change your life forever. We’ll show you how. 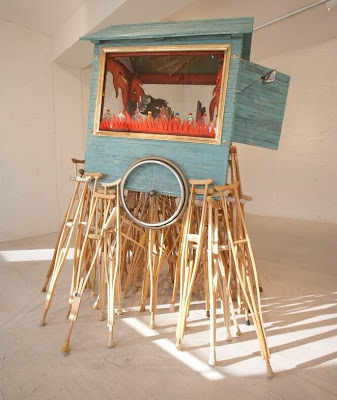 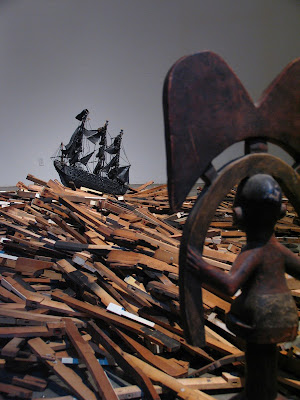 NEO HOODOO IS AN AMAZING EXHIBIT, I AM SORRY I WAITED SO LONG TO VIEW THIS INSPIRING BODY OF ART WORK, I WOULD HAVE LIKED TO HAVE VISITED THIS EXHIBIT SEVERAL TIMES VERY SLOWLY. I THINK THE EXHIBIT WAS A WONDERFUL IDEA: THE ART OF A FORGOTTEN FAITH (SIMPLY BRILLIANT SEEDS OF THOUGHT), THIS EXHIBIT WAS ESPECIALLY INSPIRING TO ME FOR THE CONNECTION TO MY TRAVELING EXHIBIT (RE) POSSESSED THAT I HAVE CASTED SAIL, TO CROSS THE COUNTRY.

P.S.1 Contemporary Art Center presents NeoHooDoo: Art for a Forgotten Faith, an exhibition co-organized by The Menil Collection that brings together a multigenerational group of North, South, and Central American artists who address the value of ritual in the artistic process and the wider implications of spirituality in contemporary art. On view in the 2nd Floor Main Gallery, Project Rooms, and Corner Gallery.
Including some 50 works of sculpture, photography, assemblage, video, performance, and other media, NeoHooDoo asserts that the drive towards a spiritual practice is as relevant today in our burgeoning global society as it has ever been. Artists have long engaged with ritualism to enrich their work, drawing on the traditions of shamans, griots, and oral historians. NeoHooDoo “grew out of a desire to explore the multiple meanings of spirituality in contemporary art,” states P.S.1 Curatorial Advisor and Menil Curator of Modern and Contemporary Art Franklin Sirmans.
In the late 1960s poet Ishmael Reed adopted the 19th-century term “HooDoo,” referring to forms of religion and their practice in the New World to explore the idea of spiritual practice outside easily definable faiths or creeds and ritualism on contemporary works of literature and art. “Neo-HooDoo,” he writes in his 1972 collection of poetry, Conjure, “believes that every man is an artist and every artist a priest.” His seminal poems, “The Neo-HooDoo Manifesto” and “The Neo-HooDoo Aesthetic,” delve even deeper into this artistic practice to demonstrate its vitality as an international, multicultural aesthetic that embraces spiritual creativity and innovation.
From Vancouver to Havana, Guatemala City, and Bahia, the artists in NeoHooDoo began using ritualistic practice as a means to recover “lost” spirituality and to reexamine and reinterpret aspects of cultural heritage throughout the late 1970s and early 1980s. Visual artists from across the Americas, such as Jean-Michel Basquiat (1960–1988), José Bedia (b. 1959), Rebecca Belmore (b. 1960), Jimmie Durham (b. 1940), and Ana Mendieta (1948–1985) have freely combined disparate materials and mediums to create spaces where art and audience can interact unhindered by history or societal constraints. For these artists, ritual practice often emerges as a form of catharsis and political critique to approach issues such as race, gender, slavery, and colonization. This exhibition also will look at younger artists such as video artists Michael Joo and Regina José Galindo, who carry on many of these practices and themes decades later, reconfiguring the work of their predecessors into performative displays of ritual through film and gallery installations.
Challenging conceptions of “insider” and “outsider” art, the artists in the exhibition frequently create work using everyday objects that resonate both within the confines of a gallery or museum and among their own localized audiences who may or may not visit art institutions. Situating their work in a vernacular aesthetic, the meaning of the work fluctuates according to its context. Items such as light bulbs, wine bottles, artificial flowers, piano keys are repositioned in assemblages confronting themes of exploitation, genocide, and poverty. The 53 pieces of discarded waste paper comprising Jimmy Durham’s A Street-level Treatise on Money and Work are brought to the center of a dialogue on the destruction of native cultures and Dario Robleto addresses American notions of manifest destiny in Deep Down I Don’t Believe in Hymns by taking a military-issued blanket and “infesting” it with hand-ground dust made from vinyl recordings of Neil Young’s “Cortez the Killer” and Soft Cell’s “Tainted Love.”
Franklin Sirmans developed NeoHooDoo as one of P.S.1’s curatorial advisory programs, a unique system that allows diverse curators to present experimental exhibition work. Current curatorial advisors include Chief Curatorial Advisor Klaus Biesenbach, Senior Curatorial Advisor Neville Wakefield, Andrea Bellini, Phong Bui, Lia Gangitano, Susanne Pfeffer, and Franklin Sirmans.
NeoHooDoo: Art for a Forgotten Faith will be accompanied by a fully illustrated catalogue featuring texts by Arthur C. Danto, Greg Tate, Robert Farris Thompson, Jen Budney and Julia Herzberg. The catalogue will also include an interview with Ishmael Reed by Franklin Sirmans and a work by renowned poet Quincy Troupe. The fully illustrated, color catalogue will be available for purchase at Artbook @ P.S.1 (144 pp., $45.00).
Artist List:
Terry Adkins, Janine Antoni, Radcliffe Bailey, José Bedia, Rebecca Belmore, Sanford Biggers, Tania Bruguera, James Lee Byars, María Magdalena Campos-Pons, William Cordova, Jimmie Durham, Regina José Galindo, Felix Gonzalez-Torres, David Hammons, Michael Joo, Brian Jungen, Kcho, Marepe, Ana Mendieta, Amalia Mesa-Bains, Pepón Osorio, Adrian Piper, Ernesto Pujol, Dario Robleto, Betye Saar, Gary Simmons, George Smith, Michael Tracy, Nari Ward

The exhibition is co-organized by The Menil Collection, Houston, Texas, and P.S.1 Contemporary Art Center. It was previously presented at The Menil Collection and will travel to the Miami Art Museum from February 20 until May 24, 2009.
Posted by Xenobia Bailey's Artist Journal at Monday, January 26, 2009 No comments: