FIRST-SUN OF THE NEW YEAR... 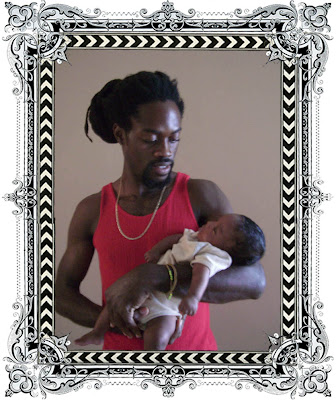 12:20 pm, A mild misty/rainy day:... Happy New Year,... As the Sun Rises on the New Day and New Year, I think of New Births that always bring exciting expectations to a community.... This photograph, is of a good friend, who lives in my community. International photographer Richard Rose' and his beautiful son Mosiah Rose, Mosiah's name comes from the middle name of Marcus Mosiah Garvey, Jr. This powerful act of naming this child, roots Mosiah Rose into a strong sense of history and clears a way for a bright creative culturally conscious, fulfilling future.
Posted by Xenobia Bailey's Artist Journal at Tuesday, January 01, 2008 No comments:

Email ThisBlogThis!Share to TwitterShare to FacebookShare to Pinterest
Labels: Photo by Xenobia Bailey
5:53 pm very calm evening: Very quiet day today, did a little work on the computer, Listened to my phone messages from yesterday, I have to follow up on one possible visiting artist gig, went to the store...... Blah,...blah....blah,,,

I was thankful that the historical significance was printed in the church program. The "Watch Night Service" has a great political and historical significance, it's roots can be traced back to gatherings of en-Slaved Africans on December 31, 1862, also known as "Freedom's Eve." on that night, the en-slaved Africans congregated where ever they could, in what ever meeting places they created or found across the nation, in place of worship and fellowship, they anxiously waiting for news that the Emancipation Proclamation would become law.

With the north and south regions of America about to enter the third year of a bloody civil battle, President Abraham Lincoln was set to sign an edict that would impact the enslaved Africans, and fundamentally transform the character of the war.

This Emancipation Proclamation decreed "That all persons held as slaves within any state, or any designated part of a rebellious state, shall be henceforward and forever, "FREE" at the stroke of midnight on January 1, 1863, en-slaved Africans in the Confederate States were declared legally "FREE".

When this was heard by the en-slaved Africans (Who many could not read) complete Jubilation broke-out among the newly Emancipated African-Americans.

Last nights service was an unusually moving, beautiful and powerful service for me, it was eloquently pastored by Rev. Dr. Calvin O. Butts, III. Abyssinian Baptist Church has a very impressive history to the community of Harlem and the United States, This church was pastored by the brilliant and charismatic, national politician ("Keep the Faith, Baby") Adam Clayton Powell Jr.

Talk about shaking things up during troubled times, This man was amazing.
Posted by Xenobia Bailey's Artist Journal at Tuesday, January 01, 2008 1 comment: