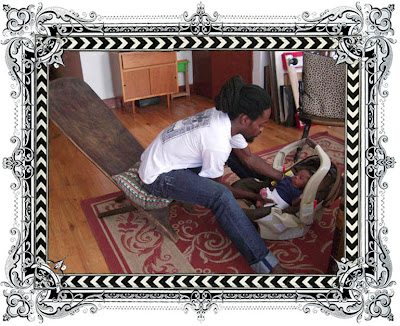 This here, is a image of proud Father Richard, with his son, This was taken this past Oct, 2007,.... The Sunday before I went to London,.... I called Richard and his wife Theresa Sunday morning to ask them what they were doing that day, because I wanted to come by and see the baby before I left for London, They said that they were planning to go to church for fellowship that morning,… they invited me over for a after church meal,

Well….They were not able to get themselves and the kiddies ready in time for church (totally understood), but I decided to go since I was going to be leaving the country,…

Abyssinian (there seems to be a few ways to spell this) Baptist Church in Harlem is our church of choice for fellowship… it was an amazing service on a beautiful Summer like Fall morning. A large group from the church and Rev. Calvin Butts had just returned from a Pilgrimage to Ethiopia,….

Rev Butt. Spoke so beautifully about their travels,….During this trip, Ethiopia was celebrating their 2nd millennium, he spoke about the festivities, formal banquets, tours of palaces, helicopter rides viewing the land and an moving story about foot climbing up the mountains for a breathtaking view....He said, Rita Marley was there with her family.

I had to get 2, CD copies of this sermon, one for myself, and one for Richard and Theresa since they were unable to attend this service, I thought it was one of those historical moments to be captured and shared, I plan to get a copy of the CD of the sermon Rev Butts delivered before the group left for Ethiopia, I heard, that service was equally as stirring as the one I attended.

I have to look up the dates,… But…Emperor Haile Selassie of Ethiopia had visited Abyssinian Church and presented Rev. Adam Clayton Powell Jr., who was the pastor at that time. with a Ethiopian Coptic Cross that is displayed in the church…..Now!!…Ain’t that something to write home about?
Posted by Xenobia Bailey's Artist Journal at Wednesday, January 02, 2008 No comments: