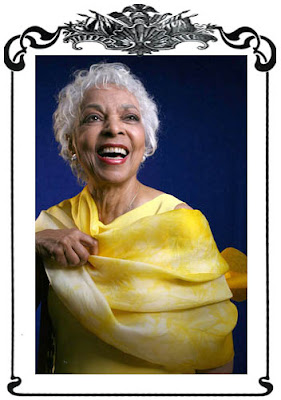 "The kind of beauty I want most is the hard-to-get kind that comes from within -- strength, courage, dignity."

This is a quote that I found on the internet by Ms Ruby Dee that I feel says it all about this LIVING LEGEND.

To be in service of a high profile person, to adorn the form of Ms Ruby Dee who has graced film and stage for decades is what us independent behind the scenes people live for.

The day my friend Casaundra Bromfield describes the experience of designing the Ball Gown and wardrobe preparation for Oprah Winfry’s Legends Weekend, was humbling and glorifying at the same time.

Ms Dee not only is the symbol of subdued majesty, she personifies the brilliance of spirit, commitment to theater arts. Along with her late husband/partner Ossie Davis they with-stood the pit falls and the glitter and gloom of early Hollywood

It’s clear, this award winning actors trophy is her radiant beauty & craft, along with wisdom, belief in self and her people,

She demonstrates belief in supporting the creative skills of African-American artist & craftspeople as can be seen in this beautiful portrait by Photographer Chester Higgins Jr. and Designer Cassandra Bromsfield.

I cherish the stories that designer Cassandra tells me about her experience with her celebrity client, Ms Bromfield designing and organizing Ms Dee's, when Ms Dee was invited to Oprah Winfry’s legendary, Legends Ball. She has told me over and over again, each and every detail of preparation.

Even down to the diamond earring Oprah Winfry gave Ms Dee, Ms Bromfields first invitation to Ms Dee’s home for wardrobe consultation work, the conversations with Ms Dee’s daughter's Hasna & Nora , being served coffee and zucchini bread by the actresses assistant as Ms Dee was called away for a quick business phone call, Flipping through the coffee table books in the living room, Seeing Ms Dee historical collection of costumes from stage & screen. I felt like I had a front role seat to backstage American Theater History.
Posted by Xenobia Bailey's Artist Journal at Thursday, January 10, 2008 No comments:

Email ThisBlogThis!Share to TwitterShare to FacebookShare to Pinterest
Labels: PHOTO BY CHESTER HIGGINS 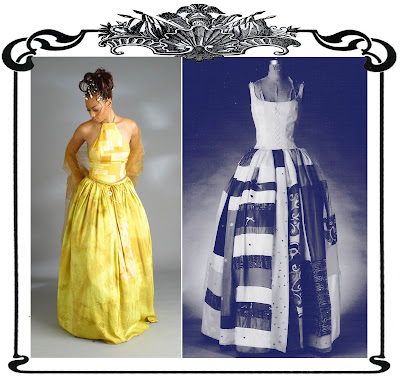 From T-shirt to Wedding Gowns & Evening Formals, that's how Cassandra Bromfield recollects the major leap she took to be in her present designer studio on 42nd St. in New York City.

That’s a mighty long stretch from vending her one of a kind custom sewn and hand adorned T-shirts by CASSANDRA BROMFIELD back in the dayz of Boys & Girl High School, African Street Festival in Brooklyn, over the 4th of July weekend.

This was in the late 1980’s, when Spike Lee and Monty Ross had just turned down-town Brooklyn into a small but mighty Black Hollywood. International and national fashion magazines, independent filmmakers and music video producers set loose their wild eyed, ultra-hip young stylist, searching the “hood” for the new look of uniquely contrived, rare and wonderful wears created by urban artist.

Back then, Cassandra, other artist and myself vended our Wearable Art together at The African Street Festival, the exposure and contacts were definitely worth the venture. Merchandisers from across the country and around the world would pass through, dropping their business cards and taking our info, conversing and checking our wears out. It was inspiring,

A visually stimulating scene, this event generated ideas for future prospects with exciting possibilities. "OUR NEXT BIG STEP", was the common thought mingling in our minds and in the thick sea of Neo-Africans for the four days of festivity.

Fast forward to the 21st Century and Cassandra Bromfield has captured and is mastering her vision by creating her Hallmark, tie-dyed, silk patchwork & decoratively quilted wedding dresses and formal evening gowns.

These garment are the elegant evolution of the African American aesthetic of collaging and patchwork quilting, Quilting was a survival textile craft and a passionate art form, developed by the enslaved Africans and later the emancipated African-American woman home maker.

In the 20th century collaging was championed by Fine Artist Romare Bearden and Quilting was elevated to a Fine Art by the internationally acclaimed Artist/Quilters of the Gee’s Bend Quilters Collective, living and creating in the area of Rehoboth and Boykin, Alabama.