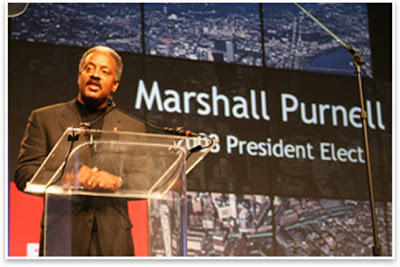 Marshall E. Purnell, FAIA, a principal at Devrouax + Purnell Architects and Planners PC in Washington, D.C., was inaugurated as the 84th president of the American Institute of Architects (AIA) during ceremonies held on December 15th 2007. He succeeds RK Stewart, FAIA, and will represent the more than 83,000 AIA members in the coming year. Purnell was elected at the AIA 2006 annual convention in Los Angeles, and has served as AIA first vice president this past year.

Purnell added, “We have to take a serious look at who we are as well as the rising generations of young women and men in this country who would and could and should consider architecture as a profession. We must be more representative of the society we seek to serve. We must actively, creatively and with an unshakable commitment to succeed, pursue this diverse representation. We must pursue it not simply as a moral, but a professional imperative.”

Purnell's leadership within the AIA has spanned several years having served as Mid-Atlantic Regional Director from 2003-2006, as well as serving as president of AIA / Washington, D.C. in 2003. His contributions to the architectural profession were recognized with his investiture in the American Institute of Architects' College of Fellows in 1991.

About The American Institute of Architects
For 150 years, members of The American Institute of Architects have worked with each other and their communities to create more valuable, healthy, secure, and sustainable buildings and cityscapes. AIA members have access to the right people, knowledge, and tools to create better design, and through such resources and access, they help clients and communities make their visions real. www.aia.org
Posted by Xenobia Bailey's Artist Journal at Tuesday, August 12, 2008 No comments: