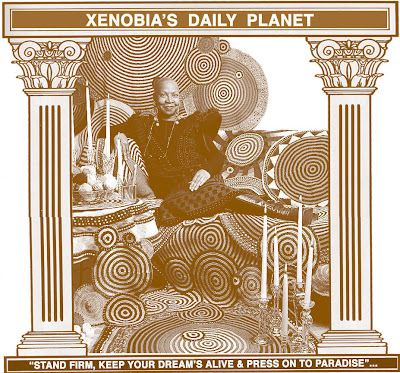 Strang weather today, it started out heavy grey clouds, windy, cold and rainy. Now it bright sun, windy and cold,... that said, my skin is so very dry… real “Ashville”

As the sun is setting, I am racing trying to tear myself away from this computer so that I can get to the Whitney Museum and see Kara Walkers exhibit tonight. This exhibit is going to close in a few days, so I really have to make a effort to see it.

I was working on the press release draft today, I already submitted it to the museum public relations, but, I will post the content of the release to save the time of explaining the project.

This project is the next stage of the project that I started in 1999, when I was a artist-in-residence at The Studio Museum of Harlem, Titled “PARADISE UNDER RECONSTRUCTION IN THE AESTHETIC OF FUNK”. That was a 7 year crochet meditation on the aesthetic of Funk, From that project is when the crochet artifacts from RE-POSSESSED came from.

So here’s the press release, I will update it later with the time, date and direction to the museum. This release is going to be edited.


“Like water, be gentle and strong. Be gentle enough to follow the natural paths of the earth, and strong enough to rise up and reshape the world.” –

The Jersey City Museum is hosting the eve of the dawning of “THE RE-POSSESSED TEA SANCTUM”. A Ceremonial Mystical Environment in the Aesthetic of Cosmic Funk,

This Enchanting installation is reclaiming the valuable cosmic properties of the aesthetic of Urban Funk, through the formal practice of a reinvented Tea Ceremony.

RE-POSSESSED is an “aesthetic-remix” works-in-progress, an assemblage of reconstituted artifacts, reflecting the dynamics of a Neo African aesthetic and the cultural impact of the European & Early American colonial experience of African-Americans, This aesthetic was unconsciously continued to some degree, into the aesthetic of the southern rural lifestyle of the newly emancipated African-Americans in the mid 1800’s. Which evolved into a Pop Culture of the Urban African-American lifestyle near the end of the 20th Century and into the present 21st Century.

RE-POSSESSING the culturally stripped is a ceremony that maintains a responsible relationship with Culture, Community, Commerce and the Cosmos.

A luxurious Tea Collection of fines blends of Black, Green, White and Herbal Organic Teas from the continent of Africa.

With a beautifully haunting soundscape created by jazz musician Rene Mclean incorporating sound tracks from performances of him and his Father the Late Great Jackie Mclean.

This is an inspirational environment created for the ceremonious tea, prepared to aesthetically strengthen, enhance, and enlighten. So that one can reap the benefits of a journey into long periods of Deep Fulfilling Meditation in the Cosmic aesthetic of Funk for the Culturally RE-POSSESSED and for those who can relate.

There is going to be a website built for the exhibit that will contain more information a contacts with the artists.
Posted by Xenobia Bailey's Artist Journal at Wednesday, January 30, 2008 No comments: