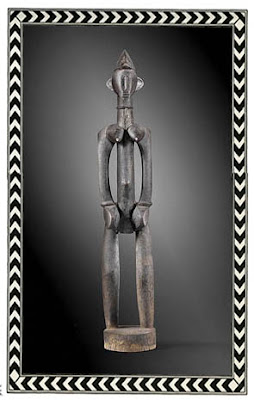 American collectors Brian and Diane Leyden, whose extensive collection of African art Brian amassed over the past 40 years, decided to sell 15 pieces at Sotheby’s in Paris. Why Paris? “All of the objects are from two Ivory Coast tribes, the Bete and the Senufo,” he said. “The market for them is stronger in Paris than it is in the United States.” (The strong Euro may also have something to do with it.) The Leydens concentrated on works in the pre-Colonial style and statuary whose impact on 20th century Western art is most evident. The sale took place on December 5, 2007 and though only seven of the lots sold, for a total of €2,200,750 ($3,225,307), the major pieces found buyers.

Georgia O’Keeffe received word in 1946 in New Mexico that her husband, Alfred Stieglitz, had suffered a serious stroke in New York. Catching the next airplane from Albuquerque, she was by his side when he died on July 13. No one at Fisk University in Nashville knew then that Stieglitz’s death had put into motion a chain of events which would lead to Fisk’s receiving, in 1949, an art collection considered “the finest of its type anywhere in the South.”

Stieglitz, one of the greatest photographers in the history of the medium, is credited with transforming photography from a method of documentation into an art form. As a premier collector and gallery owner of his time, Stieglitz encouraged and acquired art work by many young American artists, including Arthur Dove, Marsden Hartley, Georgia O’Keeffe, Charles Demuth, and John Marin. He is also credited with mounting the first exhibition of African sculpture in the United States. O’Keeffe, generally considered the most important female artist in 20th century America (a description that would have irritated her), had both a business and personal relationship with the much older Stieglitz. They married in 1924, despite the 23-year difference in their ages.

Along with his own photographs, Stieglitz amassed a substantial collection of paintings, but he failed to do anything with the collection during his lifetime, leaving that particular burden to O’Keeffe after his death. His will granted O’Keeffe the right to select the recipients of the art, provided it went to “one or more” non-profit corporations “under such arrangements as will assure to the public, under reasonable regulations, access thereto to promote the study of art.”

O’Keeffe undertook the difficult task of organizing and giving away over 1,000 pieces of art. She eventually divided the works among six institutions. The first five were logical choices: the Library of Congress, the National Gallery of Art in Washington, the Metropolitan Museum of Art in New York, the Art Institute of Chicago and the Philadelphia Museum of Art. The sixth choice was a surprise: Fisk University.

Founded in 1866 to educate newly freed slaves, Fisk is Nashville’s oldest university. Outside the black community, Fisk was at that time probably best known for its choir, the Fisk Jubilee Singers, who have performed throughout this country and others since 1871. Fisk was also respected for offering a solid academic program: in 1930 it became the first African-American institution to earn accreditation by the Southern Association of Colleges and Schools. The obvious question, however, is why Fisk was selected to receive 101 pieces of art from the collection, when neither Stieglitz nor O’Keeffe had ever visited this small, historically black college in the South, where rigid segregation was the order of the day.

Enter Carl Van Vechten, New York writer and photographer and friend of both Stieglitz and O’Keeffe. A patron of the Harlem Renaissance with a consuming interest in black culture, he was also a friend of Fisk President Charles Johnson. Van Vechten informed O’Keeffe of his intention to leave many of his photographs and other materials to the school and introduced her to President Johnson. Johnson, a sociologist by training, had come to Fisk in 1928 after spending several years in New York as director of research for the National Urban League and as a supporter of the arts. Elected president of Fisk in 1946, Johnson was the first black to occupy that position.

Later O’Keeffe explained that she picked Fisk because it would have made Stieglitz happy. Since she had given portions of the collections to institutions in the Northeast and the Midwest, she thought it logical that some of the collection go to another part of the country.

Whatever her reasons, the choice was not without problems. In late October 1949, O’Keeffe and her assistant drove to Nashville from New Mexico to inspect the gallery (to be named in honor of Van Vechten) and to assist with the hanging of the art. Fisk had gone to considerable effort and expense to convert its old gymnasium into an art gallery, hiring a New York architect to design the space. When O’Keeffe saw the gallery for the first time, she hated it. She and her assistant began conforming the space to her wishes, coming in at 7:00 each morning to meet with the workmen. For at least a week she made changes: replacing the lighting, removing molding, painting walls, changing the color of cabinets, and more. Still unhappy with the lights, she flew in a lighting expert on the morning of the opening to make final changes.

The opening ceremonies took place on the afternoon of November 4, 1949, in Memorial Chapel, filled to capacity with over 900 present. President Johnson introduced O’Keeffe, who declined to approach the rostrum, speaking instead from her chair: “Dr. Johnson wrote and asked me to speak and I did not answer. I had and have no intention of speaking. These paintings and sculptures are a gift from Stieglitz. They are for the students. I hope you will go back and look at them more than once.” Van Vechten also spoke briefly, concluding that the gallery was “not equaled by any in New York City.” The dean of education at New York’s Metropolitan Museum of Art delivered the major address.

The Stieglitz Collection consists of 101 art works: five pieces of African tribal art, nineteen Stieglitz photographs, two paintings by O’Keeffe, prints by Cezanne and Renoir, and a number of paintings by Marsden Hartley, Arthur Dove, Charles DeMuth, and John Marin. The Collection is currently in storage at the Frist Center for the Visual Arts while Fisk implements plans to improve the facilities of the Van Vechten Gallery.

Author’s Note: The author’s law firm, Bone McAllester Norton, PLLC, represents Fisk University in its current litigation brought in the Chancery Court of Davidson County seeking approval of the Court for the sale of two pieces of art from the Stieglitz Collection. This essay does not discuss the legal issues in that case, but only recounts the facts and circumstances of how this fabulous art collection came to be given to Fisk.

Email ThisBlogThis!Share to TwitterShare to FacebookShare to Pinterest
Labels: The Stieglitz Collection at Fisk University

After months of legal wrangling, Fisk University is no longer ensnared in a court battle with the Georgia O'Keeffe Museum over the school's Alfred Stieglitz Collection.

On Tuesday, the Santa Fe, N.M.-based museum dropped a lawsuit against Fisk that sought possession of the collection of 101 paintings, donated to the school in 1949 by painter Georgia O'Keeffe. The move opens the door wider for Fisk to consider an informal $30 million offer from Wal-Mart heir Alice Walton, who's building a museum in Arkansas.

"It would be an understatement to say we're happy," said Fisk University President Hazel O'Leary after learning the lawsuit had been dropped. O'Leary made the decision in December 2005 to sell two paintings from the Stieglitz Collection; the museum argued -- and Davidson County Chancellor Ellen Hobbs Lyle agreed -- that the sale would violate the painter's wishes.

"This has been a very long journey for Fisk, and it has most especially distracted my attention from the business of the university. I'm happy to go back to doing the full-time job of being president of Fisk."

The museum's decision comes one day after Lyle rejected an agreement that would have ended the lawsuit by leaving the museum in possession of the collection's most important painting, O'Keeffe's Radiator Building -- Night, New York. The financially beleaguered university would have received $7.5 million and the opportunity to display Radiator Building for four months every four years.

Lyle rejected the agreement, in part, because of a more appealing offer informally extended by the soon-to-open Crystal Bridges Museum of American Art. The Bentonville, Ark., museum would pay Fisk $30 million for a 50 percent interest in the collection, along with shared exhibition rights.
Posted by Xenobia Bailey's Artist Journal at Wednesday, January 09, 2008 No comments: