1929: WHITE HOUSE TEA AND NO SYMPATHY: THE DePRIEST INCIDENT: THE FIRST AFRICAN AMERICAN WOMAN INVITED TO TEA AT THE WHITE HOUSE 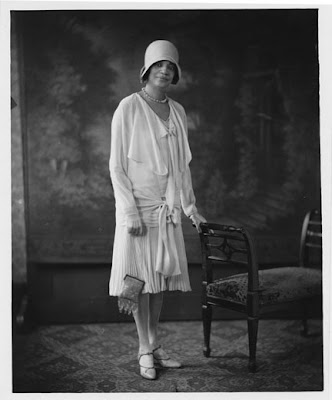 In the early summer of 1929, citizens in the nation’s capital enjoyed reading about the White
House activities of President Herbert Hoover and his wife, Lou Hoover, in their local newspaper.
They learned that a “talking movie” was shown at the White House , that the president’s
pets had acquired silver-plated nametags, and that a policy had been implemented to reduce
the number of handshakes the president had to endure during public receptions. By July, the
Hoovers no doubt sorely missed such whimsical coverage, when it was replaced by reports criticizing
Mrs. Hoover for inviting an African-American woman to attend a White House tea.
Ordinarily, the First Lady’s activities would have been covered in the society news; in this
case, however, Lou Hoover made front page headlines in newspapers across the country. Early
in her husband’s administration, Mrs. Hoover planned to invite the wives of U.S. Congressmen
to the White House, but she faced a dilemma. For the first time in decades, and for the first time
ever outside the South, an African-American man had been elected to the U.S. Congress. Should
she invite his wife, Mrs. Oscar DePriest, to tea at the White House along with the wives of the
other Congressmen? She decided to do so, and Mrs. DePriest accepted the invitation and did
indeed visit the White House, igniting a firestorm that demonstrated the sensitive and symbolic
nature of the White House, as well as the delicate state of race relations in America on the cusp
of the Depression.
The Incident
Oscar DePriest was the first African-American elected as a U.S. Congressman since Reconstruction,
and he was the first African-American ever elected to serve in the U.S. Congress from
outside the South. A Republican from Chicago, DePriest began his term in March 1929, at the
same time President Hoover started his term as president. It quickly became clear that a decision
had to be made about what to do about Mrs. DePriest. While President and Mrs. Hoover
tried to minimize political fallout, there does not seem to be any doubt that they would include
Mrs. DePriest. It would be difficult to ignore White House traditions, so canceling the event was
not really an option. Nor would the Hoovers snub Mrs. DePriest by excluding her.

(I WONDER WHAT "THEY" WOULD SAY TODAY,... THEM DRY BONES MUST BE JUMPING ALL OVER CREATION RIGHT ABOUT NOW)
Posted by Xenobia Bailey's Artist Journal at Monday, December 22, 2008 2 comments: