CHANTING & WAITING FOR THE BODY OF DR BARBARA ANN TEER TO ARRIVE AT THE NATIONAL BLACK THEATER FROM OWENS FUNERAL HOME. 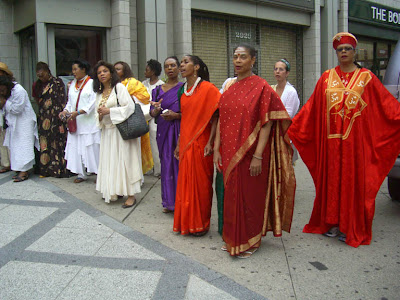 STANDING IN LINE WAITING TO PAY LAST RESPECT TO AN AMAZING ARTIST..... THIS WAS THE MOST BEAUTIFUL ARRANGEMENT I HAVE EVER SEEN IN MY LIFE, DR TEERS WAS SENT HOME ROYALY. 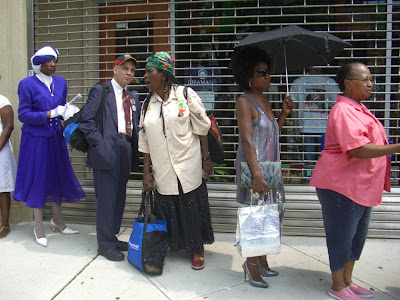 FOLKS FROM THE NEIBORHOOD WAITING IN LINE TO PAY THEIR LAST RESPECTS TO A MAJOR CULTURAL PIONEER DR BARBARA ANN TEER. 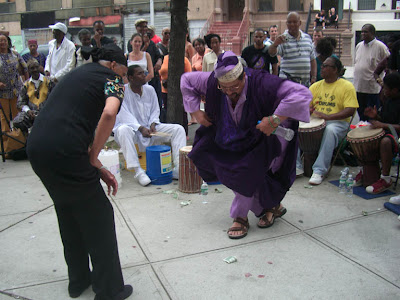 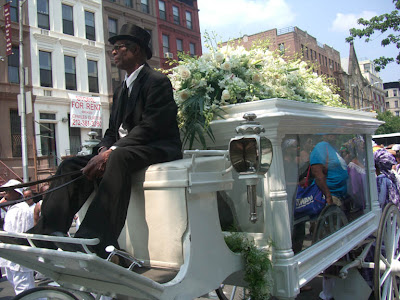 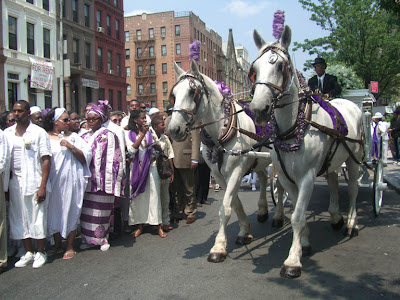 THE HORSE DRAWN CARRIAGE WITH DR BARBARA ANN TEERS CASKET IS PULLING OUT TO BEGIN THE PROCESSION. 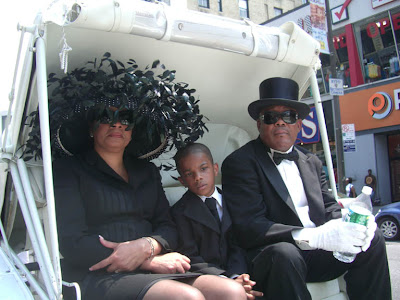 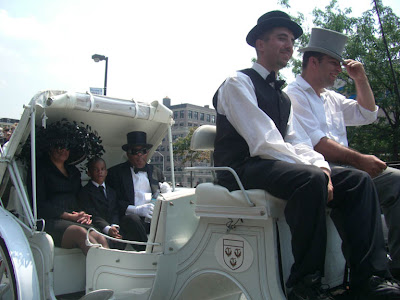 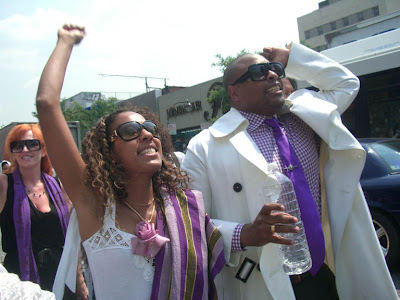 THE MASTER WORKS OF DR BARBARA ANN TEER, HER TO LOVING ADULT CHILDREN CHANTING PRAISES FOR THEIR BELOVED MOTHER BEHIND HER WHITE HORSE DRAWN CASKET, ALL THE WAY FROM NATIONAL BLACK THEATER TO RIVERSIDE CHURCH WITHOUT STOPPING. 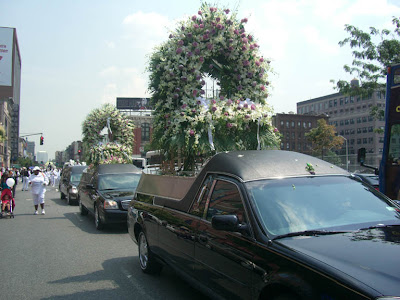 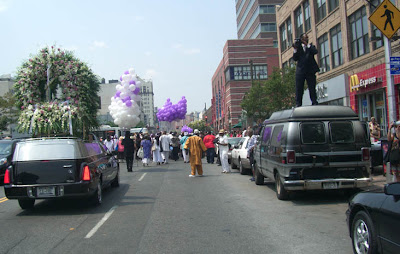 I HAD TO PHOTOGRAPH THE PHOTOGRAPHER ON TOP OF THE CAR GETTING THE SHOTS I MISSED. 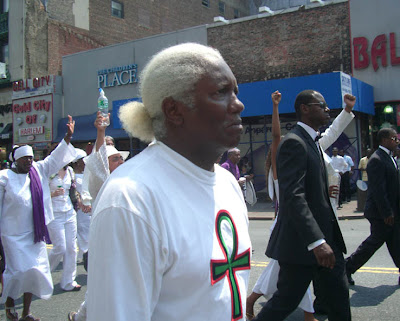 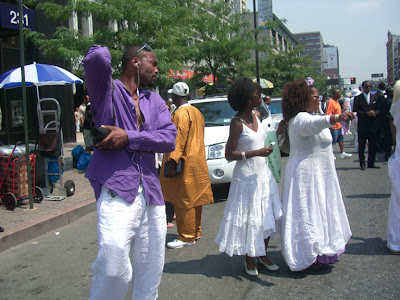 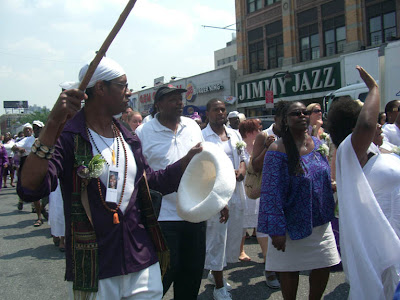 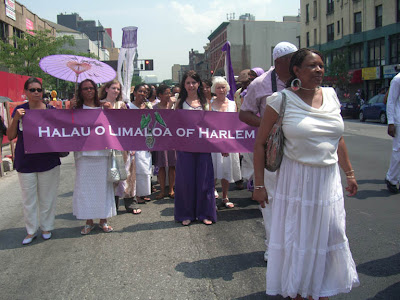 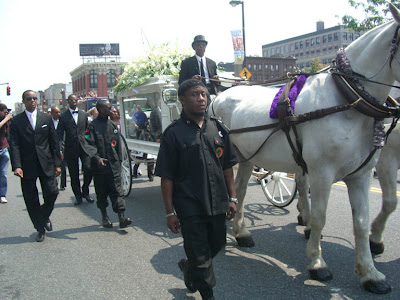 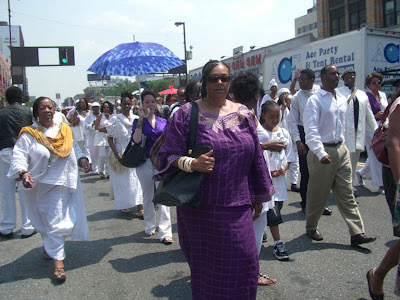 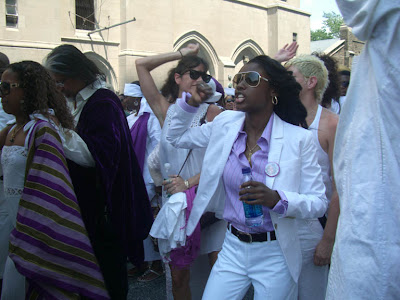 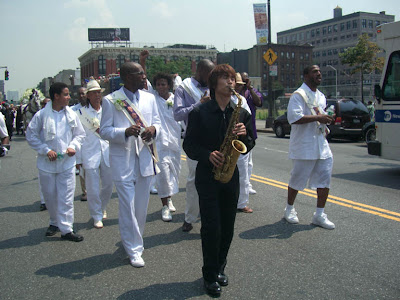 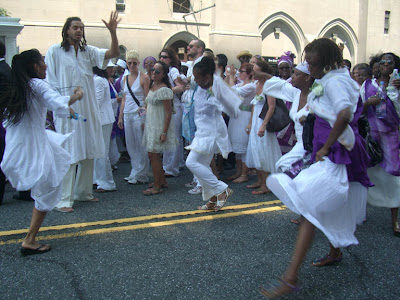 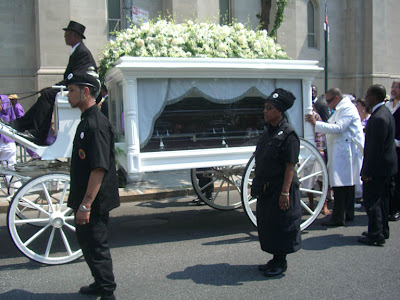 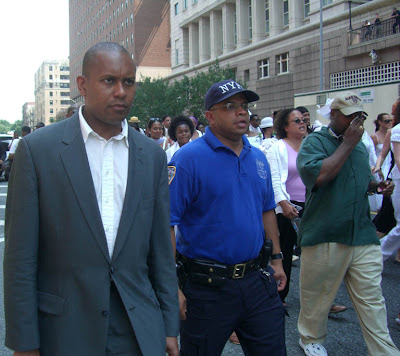 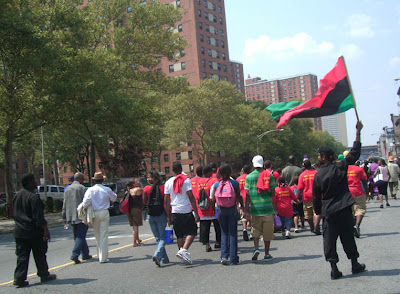 AFTER THE 6 HOUR LONG SERVICE AT RIVERSIDE CHURCH AND AFTER THE FIREWORKS, EVERYONE CAME BACK TO THE NATIONAL BLACK THEATER FOR FOOD, DRINKS AND MEMORIES 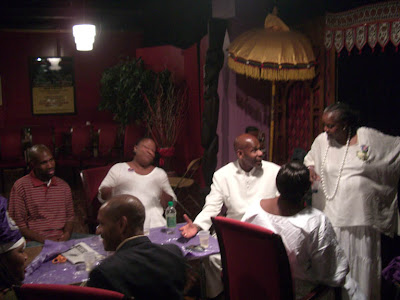 EVERYONE WAS A CULTURAL GRIOT OF HARLEM THAT EVENING... I STAYED UNTIL 1:00am... IT HELPED EASE THE PAIN OF LOSE. 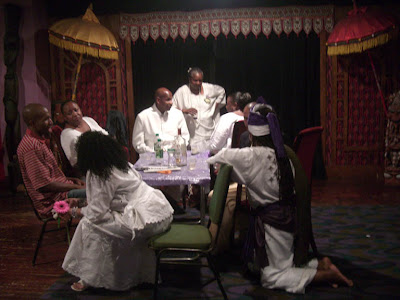 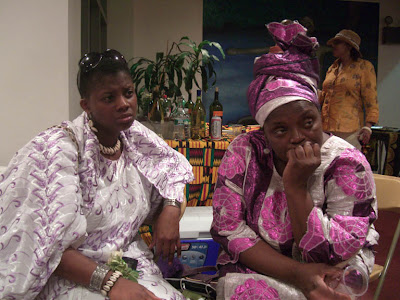 BELOW IS A ARTICLE FROM THE AMSTERDAM NEW PAPER IN HARLEM.

“You cannot have a theater without ideology, without a base from which all of the forms must emanate, and call it Black, for it will be the same as Western theater, conventional theater, safe theater,” Dr. Barbara Ann Teer once said. There was never anything conventional or safe about her National Black Theatre or the way she led her adventurous life. That journey on this plane came to an end on Monday as she made her peaceful transition from her home in Harlem. She was 71. “Dr. Teer was a great lady of the theater and, most of all, our village of Harlem,” said Councilwoman Inez Dickens. “Her vision and tireless dedication to the preservation and the growth of Black culture helped make Harlem internationally known as the Black arts capital of the world.” Dickens said she was a “samurai warrior,” and someone you could call on in times of need. “She always had my back,” the councilwoman added. Dickens’ back wasn’t the only one Teer watched like a sentinel, making sure Black culture in general—and Black theater specifically—was on solid ground and in a space to grow and nurture the next generation. In a 1973 interview conducted by Bernard White of WBAI-FM, Teer recalled her early years coming of age in East St. Louis and her college days at the University of Illinois at Urbana from which she graduated magna cum laude with a degree in dance education. It was her restless spirit, she said, that drew her to dance. “And later I was good enough to win a scholarship to study in Germany with one of the real pioneers in dance who took me under her arm,” she told White. That gesture of love and affection was extended to her students when she taught at Harlem’s Wadleigh Junior High School. By the early ‘60s she was deeply involved in the theater and a member of the Group Theater Workshop with Robert Hooks. It would later evolve into the Negro Ensemble Company. “It was in 1964 when I met Barbara,” said director Woodie King, Jr. “She was in ‘We Real Cool,’ a play based on a poem by Gwendolyn Brooks. Hattie Winston and Ronnie Clayton were featured with her. I directed her in Ron Milner’s ‘Who’s Got His Own,’ and she and Glynn Turman were fantastic.” King said the going wasn’t always smooth—they had their share of artistic differences, but the end result “was always beautiful because she was a brilliant actress.” He said he remembered when she told him she was going to start her own theater, and that dream became the National Black Theatre, which Teer founded in 1968. But there were other theatrical achievements in the ‘60s, including her performance in Amiri Baraka’s “Experimental Death Unit” in 1964. “She was very good in this role,” Baraka said, “and I’ll always remember how she conveyed her part with passion and conviction.” Danny Glover said he never got a chance to work with Teer, but was effusive in his admiration for what she had done to sustain Black theater. “I’ve been to her theater for several events and it’s an awesome cultural complex, and the perfect place for her to insure our sense of dignity and identity,” he said. “My last meeting with her last Saturday left an indelible impression,” said actor and activist Cliff Frazier, who traced their relationship back to 1965 and Teer’s performance in Douglass Turner Ward’s “A Day of Absence.” “I will always see her vibrant, smiling face.” It was the longest conversation he had ever had with Teer, Frazier said, and one he’ll never forget. Besides her ccomplishments on stage, Teer made her mark on the screen in such films as “The Angel Levine” with Harry Belafonte, and “The Pawnbroker” with Rod Steiger. She also held an honorary doctorate degree of law from the University of Rochester and an honorary doctorate degree of humane letters from the University of Southern Illinois. In 1973, Teer traveled to Africa on a grant from the Ford Foundation, spending several months in Nigeria studying dance and other cultural rituals that would later play a vital part in her spiritual and intellectual growth. At the National Black Theatre, which is like the eastern anchor of a now bustling 125th Street, it is possible to see all the wonderful manifestations of Teer’s artistic and political vision. By 1983, an entire block was hers and it became part shrine and part forum where community groups could host conferences, performances and concerts. “And I am going to work to make sure that her landmark legacy, the National Black Theatre, lives on as she envisioned—as a home to nurture and showcase the magnificent culture of the Black Diaspora,” Dickens promised. Dr.Teer leaves in spirit and love two children, Sade and Michael Lythcott, and a host of long-term staff, friends and family. Owens Funeral Home will host her transition in New York. She will be released in perpetuity when returned to her home town for her interment with her family who preceded her. Plans are being made for a wake/viewing this Sunday, July 27, and evening services on Monday, July 28.
Posted by Xenobia Bailey's Artist Journal at Friday, August 01, 2008 3 comments: